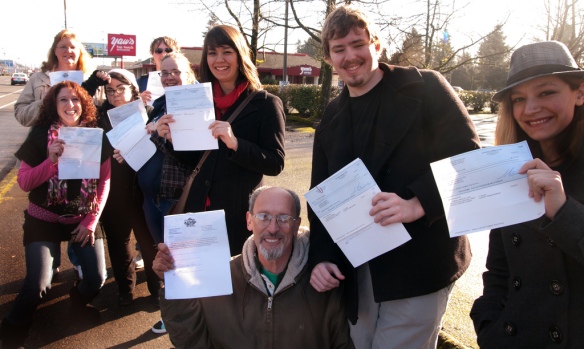 On January 24th, ten former workers from Yaw’s Top Notch Restaurant won their campaign against wage theft and picked up checks from management.  The workers confronted their supervisors over more than $1200 in unpaid waged for mandatory unpaid meetings, illegal paycheck deductions, and missing time cards.

END_OF_DOCUMENT_TOKEN_TO_BE_REPLACED

When Gibson confronted her boss about wage theft, he challenged her to do something about it. That’s when she heard about the Wage Theft Action Network and within a week, she gathered dozens of supporters to confront the boss directly and demand her wages back.

With the support of the Wage Theft Action Network, Gibson held a series of actions to hold her former boss accountable for the wages he’d stolen. Last week, we organized two pickets and we finally broke through after weeks of our calls being ignored.

END_OF_DOCUMENT_TOKEN_TO_BE_REPLACED

Gibson is a local Portlander who worked at the Lyrik Café for several years. When the café was sold and came under new management, there were several changes. The new owner, Mike Lemmo had a different vision for the café, a direction that did not include a lot of the staff. It was clear to Gibson that she was not included in that vision, when Mike disproved of her appearance, called her a “dirty hippie” and made groundless accusations that she stole from the café. Later, he fired her via a text message. But not before he deducted over $100 from her final paycheck – the amount he claims she stole – and did not provide a pay stub.

END_OF_DOCUMENT_TOKEN_TO_BE_REPLACED

Martha Macias is an example of a worker who has had her wages stolen for the last three years. Martha worked at a neighborhood lotto deli. She is a mother of two and lives in an area where the bad economy has hit hard. Many see themselves as lucky to have jobs even if those jobs are not paying them for all their work. For Martha it became an issue of respect.

Her boss started taking money from their paycheck if they were off on the till. Once Martha was off roughly $6 and he deducted from her paycheck. She confronted him and he responded with “I don’t like to lose money.”

It was then that it clicked for Martha and she responded in kind. “I don’t like to lose money either and I am working 84 hours in an 80 hour pay period and I’m working those extra hours for free.”

END_OF_DOCUMENT_TOKEN_TO_BE_REPLACED

Like many low wage workers, Carmen felt that she and her co-workers were not being respected for their labor. On a regular basis, Carmen was required to work 15 minutes off the clock. In addition, there was no clear process to file complaints. When workers did complain, some of the managers ridiculed and verbally abused them. That all changed when Carmen took a brave step and decided to go public with her complaints.

By taking action and joining with her community and supporters Carmen was able to negotiate with the management. They did the right thing and wrote her a check for her missing wages. For Carmen this was not about the money, but was about respect for her and the other kitchen staff.

END_OF_DOCUMENT_TOKEN_TO_BE_REPLACED

For two years Carmen Lopez worked in the kitchen at Beaches Restaurant. The work is fast-paced from open to close. However, in order to prep for the days work Carmen and other workers have regularly been required to work off the clock by coming in early to prepare for the morning rush. Their prep time however is not paid for.

Carmen has had enough and on Thursday, April 26, she and a group of over 20 community members of the We Are Oregon Wage Theft Action Network delivered a letter to the management of the Portland Airport Beaches Restaurant branch.

Carmen’s request was reasonable – respect wage and hour law, the rights of workers, and pay her the wages she is owed for all of the off-the-clock hours she has worked.

When an employer contacted him to power wash the exterior of some apartments and do some painting, Miguel was glad to do the work. He recruited a friend to help and decided to split the $600 wage he’d been offered for the job.

“When someone doesn’t pay you, it’s like they are making fun of you. They can do whatever they want with you and it’s not right.” – Miguel Angel

END_OF_DOCUMENT_TOKEN_TO_BE_REPLACED

The Portland Solidarity Network and We Are Oregon Invite You to Attend A Series of Trainings on the Basics of Community Organizing and Building Grassroots Resistance!

All Trainings Will Be Held at:

Snacks will be available (Vegan Options)
All Trainings Are Child-Friendly!
We will have a space for children with trained attendants.

Please contact the Portland Solidarity Network at (503)-446-6065 (voicemail) or portlandsolidaritynetwork@gmail.com to RSVP or if you have any questions.

Great news! The Portland Solidarity Network (PDX Sol) has won our most recent campaign! Our friend Beth received a check for her full deposit from Brian Wannamaker, the target of our campaign, and it has been confirmed that the check has cleared, thereby meeting our campaign’s demand! Brian, the owner and landlord of the Falcon Art Community building where Beth briefly lived, initially refused to return Beth’s security deposit after she was forced to move out because of black mold in her apartment. Brian only relented and returned the deposit after PDX Sol spent several weeks engaging in direct action. Our victory proves that a network of community volunteers and supporters committed to solidarity with tenants and workers CAN produce real victories!

Beth initially got in contact with us after seeing our posters, and we took on her campaign with Beth as a member and active participant. We began by delivering a letter to the Falcon Art Community offices that demanded the return of her deposit in full. Thirty-four people came out to support Beth by crowding into the Falcon Art Community’s office and handing over the demand letter. (Watch a video of the event here: http://www.youtube.com/watch?v=Cj2kqiDDr7o&feature=youtu.be) We continued our fight after the demand delivery by engaging in a campaign of direct action – a strategy that empowers individuals and their communities to directly confront those responsible for their exploitation without relying on lawyers or bureaucratic institutions. In the case of our campaign, PDX Sol and our supporters persisted in confronting Brian until he did the right thing and returned Beth’s deposit. We relied on nothing more than the strength of our unified voice and the power that comes from public pressure.

Congratulations to Beth – not just for the accomplishment of winning back her deposit, but also for having the courage to confront a greedy landlord. And we wish to thank everyone who volunteered their time and energy by participating in the demand delivery and helping us with further actions. You have demonstrated the true meaning of Solidarity! Our success in this campaign is proof that even seemingly minor acts like attending a demand delivery can meaningfully contribute to a broader struggle for justice.

Although PDX Sol recognizes the significance of helping Beth win back her deposit, and we hope to build on the momentum from this victory leading into our next campaign, we also realize how important it is to receive support with actions and organizing. We therefore strongly encourage any sympathetic individuals to (continue to) participate in future demand deliveries and in future actions, and we urge anyone at all interested in our organization or in the concept of a solidarity network to contact us and/or attend an organizing meeting.

To celebrate our victory, members of PDX Sol as well as supporters, well-wishers, and friends and family are having an informal gathering this Friday (9/21) at 6:00 PM at the Alberta Street Pub at 1036 Northeast Alberta Street in Portland.  Everyone’s invited – especially the folks that helped Beth get back her deposit! Anyone interested in finding out more about the Portland Solidarity Network, attending future actions, or joining our organization should attend.